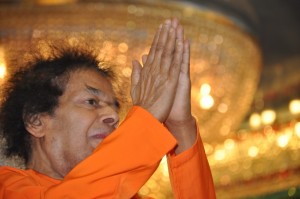 This night Baba put his hands together in front of his forehead. It was the last time Baba gave public darshan.

Baba has never put His hands like this before. 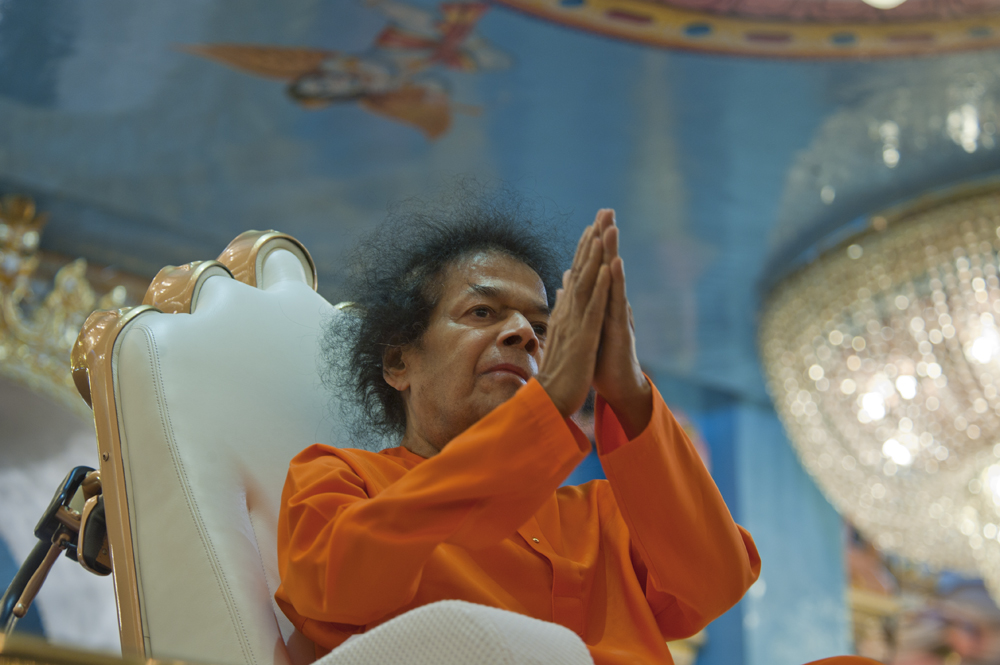 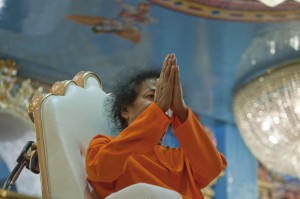 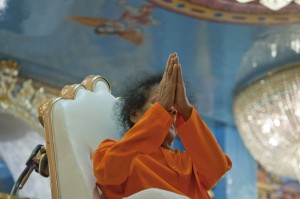 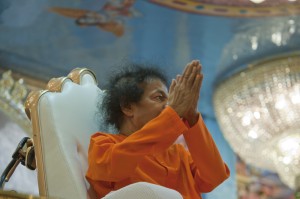 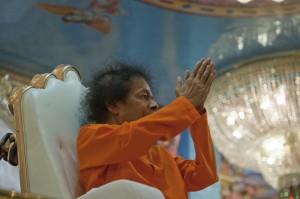 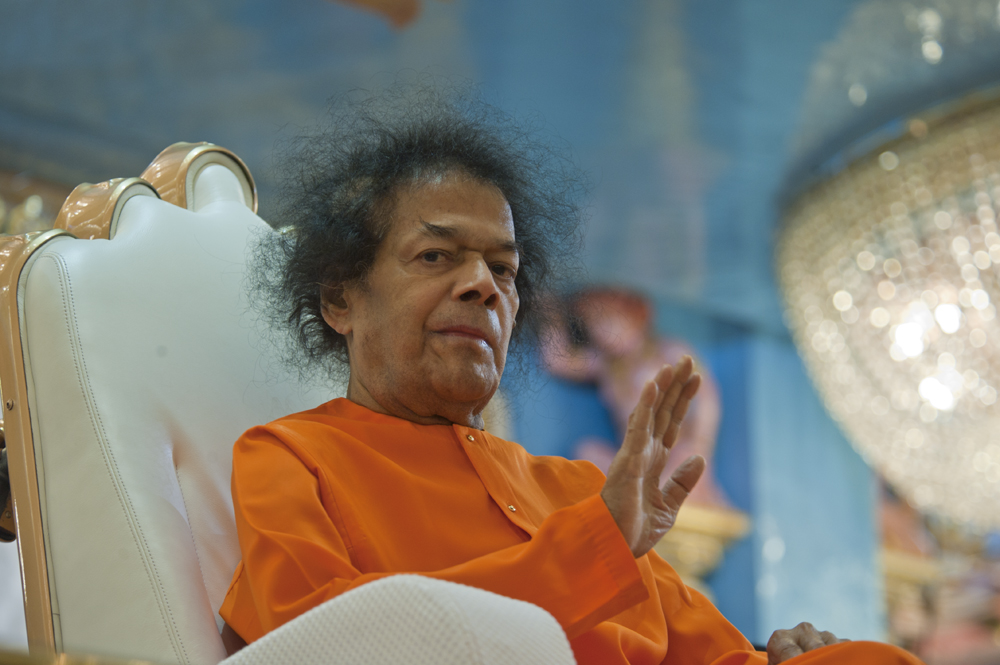 The 27th of April 2011 saw poignant scenes – the like of which have never ever been witnessed on the face of this earth. As the Mahasamadhi of an Avatar was witnessed the world over by a number unmatched in human history, tears flowed unbounded. Being in the world at this point in time was such a cleansing experience for the whole atmosphere was washed with tears – pure, selfless, love-filled and grateful. They were sufficient to wipe out all sins committed by all humanity it seemed! A lot has been written about the Mahasamadhi of Bhagawan Sri Sathya Sai Baba and a lot more will be written for this is ‘His’tory! But here is a little thought I thought I would share.

The amount of prayers that have gone on in the world has been tremendous. The name of Sai filled every conceivable space for it had been enshrined in a billion hearts. Bhajans, service activities and spiritual sadhana of unprecedented proportions pulsated on Mother Earth. At the physical level, the best man and the best machines worked tirelessly day and night at the temple of Healing that He Himself had built. His most dear students constantly were by His side and aware of every breath He was taking. The sheer magnitude of the combined effort of every devotee was enough to bring life into an inert stone! And yet, the Lord took Mahasamadhi.

This thought had plagued me when I realized that prayer is not an act of asking God or telling God. It is silent communion with Him. When we either ask of tell God, we make the preposterous and utterly foolish assumption that we know better than Him. Swami often tells us the story of two farmers – one who prayed for rain for his crops, the other who prayed for a dry day so that his daughter’s wedding could go on uninterrupted. Whose prayers should God listen to?

Of course! He will listen to the one who loves Him truly. And who is that? Naturally, the one who has surrendered to His will. When one has surrendered to His will, is not prayer redundant? Our definition of prayer changes as we realize that the one who is always in sync with the Lord has his prayers answered for he always prays for what the Lord has already willed! This is indeed a very different way of thinking. If my prayer is answered, it is because I was in sync with God; I was in communion with Him. If my prayer has not been answered, I was not in sync with Him; I have to make efforts to be in communion with Him.

It is everyone’s experience that we feel some intuitive urges. And then, these urges just manifest themselves. Let us know that these are instances when we have been in communion with Him. And when these intuitive urges have manifested for me, I have felt the thrill of experiencing Him. I see Him, hear Him and feel Him and He speaks to me! I feel the thrill because I ‘know’ His plan. And I know His plan because I have been able to be in sync with Him for those precious moments.

That is why, when I found some instances in my life where Swami indicated His Mahasamadhi, I felt so relieved. It felt wonderful to ‘know’ that its all part of His Masterplan. In tha pages of my diary I discovered a dream where months before, He indicated that He would be leaving soon. Just like someone with white hair dyes it, or a person who loses teeth puts dentures, I too covered up my knowledge of the dream and went about my life. And then, Swami gave the most poignant indication!

It happened on the evening of 20th of March. Swami had not been ‘keeping well’ if I may use that term. His darshans were few and spaced between. And yet on this day, He took two darshan rounds. He called all the students who were seated for blessings and poured grains on their head. ( about 40 students were blessed that day). He distributed a few sweets and smiled at all present. He even called the tiny tots from Primary school and blessed them. In the words of a very senior singer, “Today Swami seems so hyper active!!” There was rejoicing. And when He received Aarthi, everyone were thrilled with His tapping His hands rhythmically. And then it happened…

As the Samastha Loka chant filled the air, Swami raised His hands. But it was not the familiar Abhayahastha. He had FOLDED HIS PALMS IN SALUTATION! He seemed to send a beautiful message, “Salute all for God is in all”. The Vedic chant “Sahasra sheersha Purusha” resounded in my heart. ( That hymn says that God has thousand limbs, heads and sense organs symbolic of the fact that God is in all.) In the Bharatiya custom, this is how one takes leave after a visit!

My hairs stand at their end and I have goosebumps when I realize how Swami had indicated the Mahasamadhi. But I did not see! Swami says, “Pashyan Api Na Pashyati Moodho” (You fool! You see and yet do not see!) That was the condition. But I took pictures that day.

And today, just seeing the pictures is so relieving and enthralling for it told me that Swami knows His plans. Even when He was fine and was a week away from being ‘admitted’ to the hospital, Swami had made shown us His decision. And in showing us this decision, He also showed us His expectations. He wants our lives to be His message and one of His final acts of benediction teaches us that we should see Him in all just as He saw Himself in all. We should bow to Him in all just as He bowed to Him in all. we should love all and serve all just as He did.

And in order to share the experience, ins(a)ight and blessings from Swami that day, I post the following five images.  Let us pledge to Him that we will in our lives imbibe His message of pure Love for all. And as a teardrop makes its way down my cheek, a firm resolve flows in my blood – a resolve to Love Him and see Him in all!

—
Trust God with your everything
Sent from Radiosai Global Harmony Studios
Prashanti Nilayam
please visit Prashanti Diary @ h2hsai.org for updates with pictures
This entry was posted in Puttaparthi, Sai. Bookmark the permalink.