“This is My true Form” 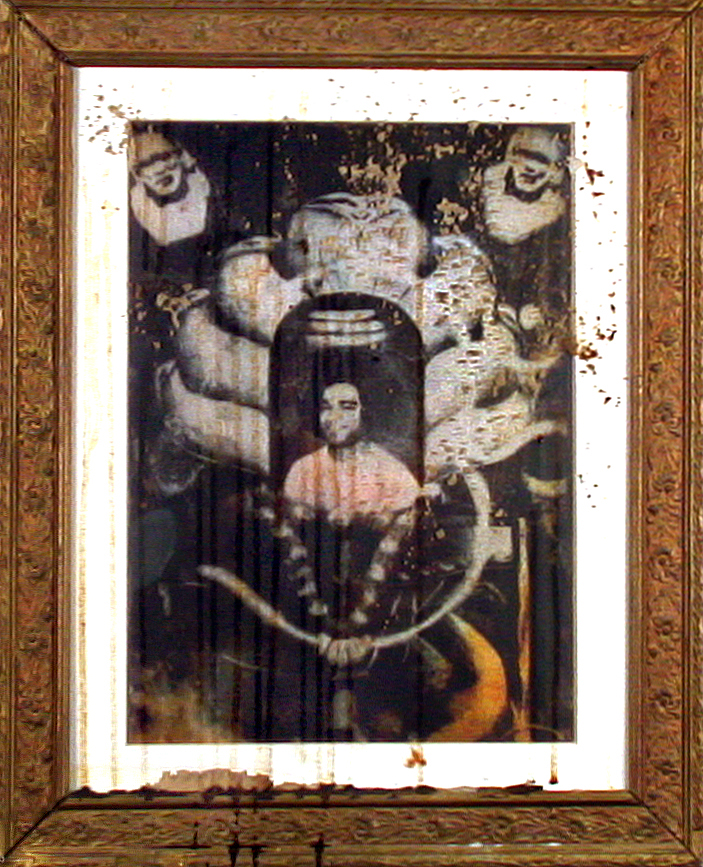 I am the Supreme Cosmic Divine Self 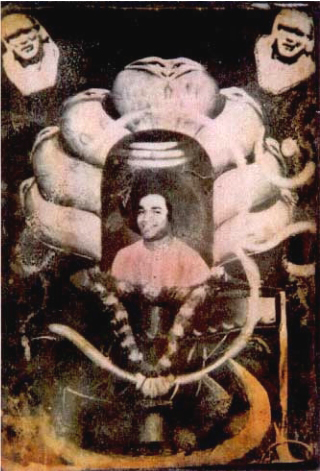 (Materialized by Baba for Ghandikota Subrahmanya Shastriji, saying “This is my true form”)

(a) Body: Bereft of body identification

(b) Sheath: Beyond senses

(i) Individual: Jeevanmuktha (one who is liberated while living)

(e) Level of consciousness: Constant integrated awareness of identity of Jeevanmuktha with Paramaathma

The Revelation of Swami’s True Form

Note: A phoneticized spelling of Sanskrit words as favored by Baba is used in this article.

This is the story of an extraordinary materialization by Bhagavan Sri Sathya Sai Baba of an unusual picture signifying the true form of Shree Sathya Sai.

On one Shankara Jayanthi day Swami asked my late revered father, Sri Ghandikota Subrahmanya Shasthri, to address a large gathering of devotees in the spacious Poornachandra Auditorium. My father, a master of Vedhic learning and practice, dwelt at length on the divine qualities and powers of Swami. He compared the divine glory of Baba with several Vedhic divinities e.g. Gayathree, Datthaathreya, Vishnu. By a slip of memory, my father forgot to mention the Shiva aspect of Baba, although Shiva happened to be his Ishta Devatha or favorite form of Divinity. All through the rest of the day he regretted this omission.

The next morning, after the regular bhajan was over, Baba called us inside and graced us with a memorable interview. The discussion centered on the triple Vedhic paths of, Karma, Bhakthi and Jnaana (Work, Worship, and Wisdom) and the triple divinities: Brahma, Vishnu, and Rudhra. At the end, Baba led us into the Bhajan Hall and showed us around the new decorative installations in the Bhajan Mandir. Baba then stopped in front of the Shiridi Baba painting and lovingly materialized an unusual color picture (shown above), declaring to my father: “Idhi naa nija svaroopam ” (This is My True Form). This electrified my revered father and also astounded me.

The first astounding feature of this created picture is that Baba’s bust image is at the heart of the Linga form of Maheshvara. Saayeeshvara is thus Lingeshvara, the force pervading the universe. Sadhashiva Linga represents the ever auspicious Aatma beyond all duality. The Lingam is the symbol of creation and the Godhead. Baba used to produce on Mahashivaraathri night Lingas from inside Him and He has materialized innumerable Lingas from His Divine Palm. Baba stated: “Having witnessed the emergence of the Linga form (on Mahaashivaraathri) I assure you that you are released from the bondage of birth-death cycles”. Baba once created for my father a Linga with Swami inside. A second time, He created a Neela Khanteshvara Linga – a blue-throated Linga symbolizing the control of poisonous substances and advised us that the water offerings poured over the Linga should be drunk for better health and vitality.

It was my father’s faith that SAI represented the Shiva Avathaar. He reached this conclusion by systematically applying Vedhic criteria for comparisons of the two divine entities, Shiva and Sai, through analogies, similarities, and congruencies in such matters as their names , meanings of names, physical features, outstanding qualities and powers (gracing, veiling, and liberating powers), and teaching of Supreme Knowledge of Truth. The book SRI SATHYA SAI AVATHAARA VAIBHAVAM in Telugu contains a number of articles and Sanskrith poetic compositions attesting to his faith in SAI as the contemporary Avathaar or Incarnation of Shiva-Shakthi, Dhaivic (divine) power. Lingas and Vibhuthi creations are the two chief hallmarks of the two divine entities, Shiva and Sai.

Secondly, the materialized Linga picture with Baba’s bust inside is prominently marked on its forehead by three horizontal thick lines of Vibhuthi, the sacred Ash, the most precious and potent object for spiritual elevation as well as for prosperity, health, and healing properties. Baba used to materialize for my father copious quantities of holy Ash frequently during his last days at Prasanthinilayam. Once, on my father’s ninety-second birthday, Baba poured a fistful of Vibhuthi on his head, putting some of it on his tongue! On another occasion, Baba materialized for my father a Vibhuthi and wet sandal paste-smeared silver medal lion with Saamba-Shiva picture on one side and the Shiva Manthra – OM NAMASSHIVAAYA on the other side saying that Baba’s angelic messengers brought it from Kailash after Shiva Pooja there! Hail to Shiva Sai MahaA dheva!

The three horizontal ash lines are called Thripundraka. As mentioned in the BRIHAJJAABAALOPANISHATH, the three lines represent the trinity, the three fires, and the three worlds. As Baba says, Vibhuthi as the mark of Shiva is applied by Him to our brow to remind us that we too are Divine. Shiva smeared Himself with Vibhuthi after He reduced Manmatha or Kaama, the demi-God of desire to ashes. Therefore Vibhuthi,

as Baba says, signifies triumph over tantalizing desires. Vibhuthi or sacred Ash is symbolic of the ultimate reality which remains when the dross of ego is burnt away by the fire of illumination. Ash or dust is the final unchangeable condition of things and as such it is a symbol of Divinity and Cosmic Dissolution. Vibhuthi given by Baba constitutes a warning lesson to the receiver to give up all desires and to burn all passions, desires, attachment, and temptations, and make one pure, holy and sacred and hence eligible for liberation.

Thirdly, the materialized picture of Shiva-Sai is encircled by OMKAAR, the primordial and eternal symbol of Brahman – Om Ithi Ekaaksharam Brahmaa – the Universal Absolute. It is the signature tune of God. Om – AUM – is the sum of all teachings of the Vedhas about Godhead and the systems of adoring. It represents the OM THATH SATH principle: “That is the Truth”, “I am the Truth”, and the “Truth is One”. SOHAM is the unstruck, spontaneous sound emanating from the process of inhalation and exhalation of our life or vital breath. Soham transmutes itself into Om when the distinction between He and I has dissolved in Yogic trance or Samaadhi. The enveloping OMKAAR in the picture bespeaks of Shiva-Sai as OMKAARESHVAR.

Fourth, the materialized picture of Shiva-Sai portrays at the back the raised hoods of the seven-headed Sesha Naaga or the primordial Divine Serpent of worldly Maaya or illusory divine energy hovering as an umbrella over the Shiva-Sai Linga. The seven heads represent the seven worlds created by Maheshvara. The hydra-headed cobra is charmed and fascinated by the Divine Snake-charmer’s flute music, as it were. So long as Nature or man subserves and adores Supreme Divinity, it is freed from its deadly poisonous desires and attachments to evanescent worldly attractions, and then by its absorption in Divinity gains power which enables it to support the seven worlds on its heads.

In another sense, the raised seven hooded serpent represents the upward flow of Kundalini energy breaking through the six energy centers (Shat-Chakras) and eventually reaching the seventh center of Sahasrara, the thousand petaled lotus overflowing with the nectar of immortality. The raised hooded serpent is also symbolic of the totality of both inner and outer energy in dedication to Shiva-Sai Linga.

The fifth feature of the Shiva-Sai Linga picture is the portrayal of the three Sai figures – Shirdi Sai, Sathya Sai, and forthcoming Prema Sai. The past and future Sai figures are shown in the upper left and right hand corners of the pictures while Sathya Sai figure is in the center of the Linga.

The sixth feature of the materialized “Saayeeshvara” picture is the stream of water flowing out of the mortar like platform on which rests the Shiva Linga. It is symbolic of the sanctified GANGAAJAL emerging from KAILAAS, abode of Shiva. It represents the controlled outpouring of life-supportive holy waters for the benefit of all creatures.

An interesting event happened recently: Baba, before switching on the electric button for releasing the first installment of piped safe drinking water supply to a number of parched villages in Anantapur district, passed by me. I was holding this Saayeeshvara picture and addressed Swami as Gangaadhareshvara in tune with the water flow shown in the materialized SAI picture. What was shown in the picture came to pass three decades later in 1995!

Shiva Sai is ever auspicious, ever beneficent (Shankara) and ever munificent and therefore worthy of adoration, worship and meditation. The garland of flowers adorning the Shivalinga represents a devotional offering to the lord of life and death as well as liberation. He is worshipped therefore as MRITHYUNJAYESHVARA, the conqueror of death; He bestows the Supreme Knowledge enabling the devotee to end the vicious cycle of birth-disease-death and rebirth. The story of how my aged and ailing father was rescued from the jaws of death by Shiva Sai has been narrated elsewhere (see AVATHAAR OF LOVE, Prashanthi Society, p.76).

This remarkable Saayeeshvara picture materialized more than three decades ago lends itself admirably to both Saguna (with name and form as Shiva-Shakthi Sathya Sai) and Nirguna (or transcendental inner illuminating LINGA and OMKAAR) meditations. My revered father was meditating on both aspects of Sai as represented in this unique picture created by Bhagavan Baba.

It is the inner SAI inspired illumination that expressed itself in the revelation of the Manthra, Sai Gaayathree by that self-same outstanding Vedhic personality Shri Ghandikota Subrahmanya Shastri on a holy day (Christmas eve) in a holy place, Brindhaavan (Divine Baba’s residence in Whitefield) at a holy time (evening Sandhya or sunset time) in the very holy direct presence of contemporary Shiva Avathaar, Bhagavan Shree Sathya Sai Baba Himself (who graciously called the renowned Vedhic scholar as ‘RISHI’). This holy Manthra reads as follows:

The purport of the Sathya Sai Gaayathree Manthra is:

“We realize through scriptural criteria, through selfless preceptors and above all by our own direct experiences of Sai’s miracles of divine love, creations, miracles of healing of our physical and mental ills, miracles of omniscient knowledge and teachings, and also miracles of His loving service activities that Sathya Sai is Divinity Incarnate. We meditate with all our heart and on this God of Truth with firm faith and trust. We earnestly pray to that All-in-All Divinity that He, in His infinite mercy and compassion inspire us, guide us, direct us, and lead us in our pursuit of the liberating path of Truth, Right Action, Peace, Love, Non-Violence, and Selfless Service or Sacrifice.”

In the recent magnificent Sai Padhukaa (holy sandals of Sai) celebrations, the whole of Prashaanthi Nilayam reverberated with the mass chanting of the Sai Gaayathree. At the end of the Divine Sandal adoration Ceremony Bhagavan came up to this writer and lovingly stated: “Subba Rao! Did you listen to the continuous Sai Gaayathree chanting?”, and graciously remarked, “your father is truly immortal (Amara)”. Some two weeks earlier, before this writer could show the original Saayeeshvara picture materialized for his revered father, for reauthentication by Baba, Swami Himself came by this writer remarking: “Where is Saayeeshvara?” It was then that I took out the picture from my pocket. Baba then reaffirmed that it was materialized for my revered father. This event once again electrified this writer’s heart. I fell at Baba’s Lotus Feet. Baba lovingly asked me to keep it and to be happy adoring and sharing it, thus re-confirming after a span of thirty odd years of the truth of Sai-Shiva!

Subsequently, this writer got the picture enlarged and laminated and Baba graciously sanctified this large size picture on the recent Guru Pournima day thus once again bestowing ineffable bliss to this writer!

TO OMKAARESHVARA, AND ABOVE ALL TO

This entry was posted in Puttaparthi, Sai and tagged Sai Shiva. Bookmark the permalink.