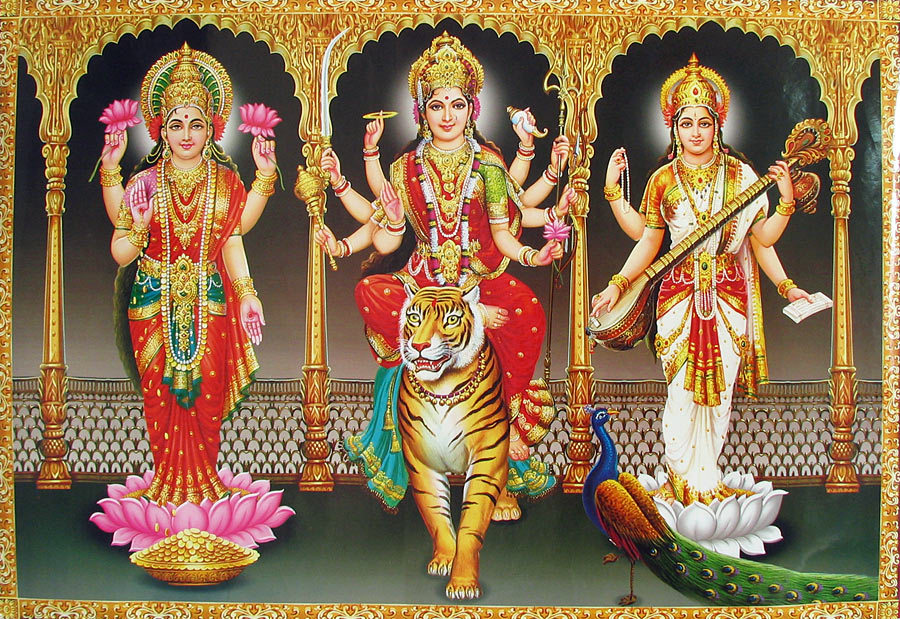 Dasara or Navaratri is a ten day festival, usually falling in the month of October, that is celebrated all over India in the worship of the Divine as the Mother principle. Bhagawan has explained that the festival of Dasara is a celebration of the triumph of good over evil signifying the vanquishing of the ‘six demons’ of lust, anger, attachment, greed, pride and jealously within us.

The Dasara celebrations at Prasanthi Nilayam begins with the Kalasha Sthapana Puja in the Bhajan Mandir. After this, Kalasha puja is performed during all days of the Navarathri.

Durga is worshipped the first 3 days,

Lakshmi the next 3 days, then Saraswati the final 3 days.

The Meaning of Navarathri

The Light and Delight of Dasara

who is the auspiciousness of all that is auspicious,

who is the consort of Lord Shiva,

who is the bestower of every desire of one’s heart.

O Devi, I have taken refuge in you.

Is the mother of the universe and believed to be the power behind the work of creation, preservation, and destruction of the world. Since time immemorial she has been worshipped as the supreme power of the Supreme Being and has been mentioned in many scriptures
– Yajur Veda, Vajasaneyi Samhita and Taittareya Brahman.

Devi Durga stands on a lion in a fearless pose of “Abhay Mudra”, signifying assurance of freedom from fear. The universal mother seems to be saying to all her devotees: “Surrender all actions and duties onto me and I shall release thee from all fears”. 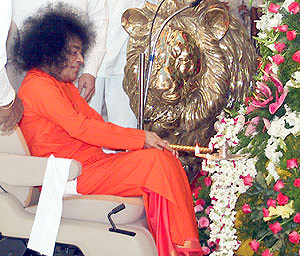 “WHY FEAR WHEN I AM HERE” …Baba

“The life of a man who cannot respect and love one’s mother is utterly useless. Recognizing one’s mother as the very embodiment of all divine forces, one must show reverence to her and treat her with love. This is the true message that this nine-night festival (the Navaratri) gives us. The supreme Shakti manifests herself in the form of Durga, Lakshmi, and Saraswati. Durga grants us energy – physical, mental, and spiritual. Lakshmi bestows on us all forms of wealth – not just money but intellectual wealth, the wealth of character, and others. Even health is a kind of wealth. She grants untold riches to us. And Saraswati bestows intelligence, the capacity for intellectual inquiry, and the power of discrimination on us. The Navaratri festival is celebrated in order to proclaim the power of the goddesses to the world. One’s own mother is the combination of all these divine beings. She provides us with energy, wealth, and intelligence. She constantly desires our advancement in life. So she represents all the three goddesses that we worship during the Navaratri festival.”