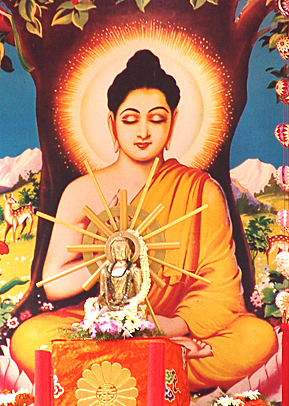 The day of Vaisakh Purnima, which usually falls in the month of May, is considered most sacred by Buddhists all over the world. This day is significant for three reasons. It was on this day that Gautama Buddha, the founder of Buddhism, was born as Prince Siddhartha at Lumbini in Nepal in 560 B.C. It is also the day when He attained enlightenment at Gaya in India, after years of search and enquiry into the causes and remedy for sorrow in the world. Thereafter, Siddhartha came to be known as Buddha, or the Enlightened one. He preached that desires are at the root of all sorrow and hence advocated the path of right conduct and the right use of senses as the way to enlightenment. He attained Nirvana (Unity with the Absolute) in 480 B.C., again on the day of Vaisakh Purnima.

This auspicious day is observed as Buddha Purnima

“Today is Buddha Poornima. Poornima means full moon. The underlying message of Buddha Poornima is that the mind should shine with total purity like full moon; it should unite with its source i.e., the Atma which is pure and effulgent. There is no darkness on the full moon night. On this auspicious day of Buddha Poornima, we should attain full purity of the mind.”- Baba

“Siddhartha, who came to be known as Gautama Buddha, undertook various spiritual practices in order to realize his true Self. He studied the Vedas and sacred texts. He met many elderly wise men and tried to know the truth from them. But none of these practices could show him the path to Nirvana. Ultimately, he realized that Nirvana lies in making use of the five senses of speech, touch, vision, taste and smell in a sacred manner. He understood that Japa, Dhyana, Yoga, Yajna, etc. were mere physical activities. These spiritual practices are needed only for those who are attached to the body. One who abides in the Self need not undertake any of these practices. Buddha taught that Nirvana can be attained only by cultivating Samyak Drishti (sacred vision), Samyak Vaak (sacred speech), Samyak Shravanam (sacred listening), Samyak Bhavam (sacred feeling) and Samyak Kriya (sacred action). Today man is polluting his mind because of his evil vision. Once the mind is polluted, how can he expect to attain Nirvana? So, first of all he should develop sacred vision. See no evil, see what is good. Man is subjected to hardships because of his unsacred vision. Evil vision is sure to lead to sinful acts. In fact, it destroys his humanness itself…

What is Nirvana? Today man aspires to attain Mukthi (liberation). What is Mukthi? It is not the attainment of a heavenly abode. Mukthi means freedom from suffering. You need to have Mukthi at three levels – body, mind and soul. For example, you are hungry. When you eat food, your hunger is satiated. This is a kind of Mukthi. Say, you are suffering from a disease. You take medicine and get cured. This is also Mukthi. All this is related to the body. At the mental level, Mukthi means controlling the vagaries of the mind. But true liberation lies in understanding the principle of the Atma which neither comes nor goes. This is termed as Nirvana.

One should have Daiva Preethi, Papa Bheethi and Sangha Neethi (Love for God, fear of sin and morality in society). That is true Nirvana. Be away from sin. Understand that Daiva Sannidhi (proximity to the Divine) is true Pennidhi (wealth). But ignorant people are unable to understand the Divine principle. They feel that they can experience God through meditation. What is meditation? It is a way of life. While you are walking on the road or driving a car, if your vision is not focused on the road, you may meet with an accident. Concentration is necessary in all aspects of life. But concentration does not become meditation. One should go beyond concentration which means the mind should become still. You should be free from thoughts. That is true meditation”. 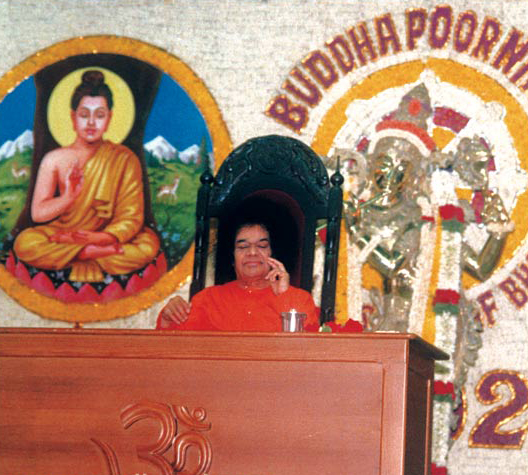 It was the day of Buddha Poornima ten years ago. Baba was then not in Prasanthi Nilayam or in Bangalore but in the tranquil hill station of Kodai Kanal – the serene spot admist dark forests, tucked away in the Upper Palani Hills in the state of Tamil Nadu.

Baba being in Kodai Kanal in 2003 was of course nothing new as many a summer of the Divine had been spent in this green valley; right from 1986 Baba often came here with a group of students and elders to the delight of the inhabitants of this hilly little town.

But the 2003 Kodai Kanal experience was exceptional for reasons more than one. First, it was a most unexpected trip; generally Baba would visit Kodai Kanal in April and return by the first week of May or on rare occasions the week after. But that year Baba started His journey to Sai Shruti, His abode in Kodai Kanal, in the middle of May.

And second, it was an extremely short trip – just a week or so, while all Kodai visits were for at least a fortnight or so.

However, the most unique thing about this trip is that the celebration of Buddha Poornima happened that year in this most pristine and peaceful locale that on one side has this beautiful lake that was covered with sparkling white lotuses, and the other side were these huge, long and majestic silver oak trees as if always straight, firm and forward in their journey to greater heights, and when you look to the third corner your eyes are filled with the kaleidoscopic beauty of this motley colour of blossoms – purple, magenta, maroon, yellow and so on, perhaps covering all hues of human emotions.

So it is in this lovely setting that the Lord decided to celebrate Buddha Poornima that year. And the most exquisite part of this festival that year that only a few privileged were fortunate to witness is this: 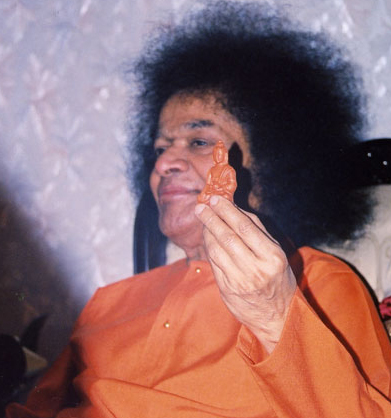 That morning as Baba was speaking to the boys inside Sai Shruti, He started elaborating on the pure nature of The Buddha, how He attained enlightenment and how He exemplified so many sterling virtues. Even as Baba was talking thus His palm suddenly moved in the air, caught that empty space, and immediately closed. And the next instant when the closed divine fist opened, all the boys could only gasp in awe!

What Baba was holding in His hand now was such a marvelously done miniature Buddha, red and resplendent.

Swami then asked, “Tell me, what is this made of?”

Baba dismissed all the answers and then revealed, “This is made up of the Lumbini mud – the sacred soil where The Buddha was born.”

And then Baba went to narrate the various austerities that Buddha engaged in, the rigorous spiritual disciplines that this holy one pursued on His path towards Nirvana – enlightenment, and as Baba was explaining thus at one point He paused and with a sudden firmness He said, “Anyone who contemplates on The Buddha, can attain Moksha (or liberation).”

Well, this is what happened a decade ago and Baba left us with something to ponder over for lifetimes. So who truly is The Buddha? And what is Moksha?

Baba in one discourse explained:

“Buddha is not a personal name. A Buddha is one who is spiritually enlightened, mentally awakened and who has realised the Supreme Truth. He is one who practises unity of thought, word and action. His heart is ever full of compassion and love. He is unaffected by the vicissitudes of life. Sakhyamuni, The Buddha, was a muni (sage) in the Sakya clan.”

And in the Buddha Poornima Discourse of 2000 Baba clearly clarified all doubts about liberation. He said:

“People have strange ideas about liberation, imagining that it involves going to heaven and having eternal existence there. That is not the meaning of liberation; it truly means achieving selfless love that is constant, unabating, and total. This is the state that one must seek to attain; it is only when this state is reached that one is truly liberated. In the name of liberation, seekers are trying out all sorts of spiritual paths. All such exercises can at best confer temporary satisfaction. The path of Pure Love alone can truly get you there and confer permanent Bliss.”

On every occasion of Buddha Poornima, Baba stressed on how this festival should be celebrated and what should be our focus as we gleefully participate in this festival.

“The same divine principle of love is present in all of you. When you take to the path of love, you will become Buddha yourself.

This entry was posted in Puttaparthi, Sai and tagged BUDDHA, Buddha Purnima. Bookmark the permalink.