He whom Christ announced 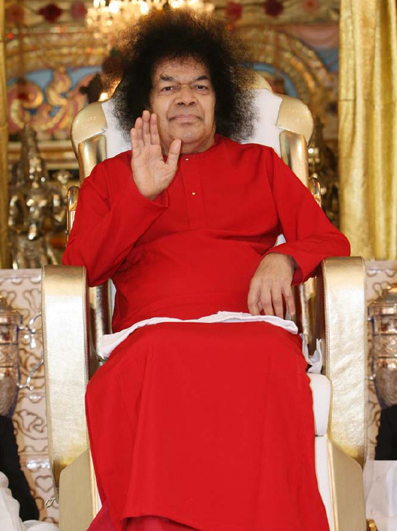 There is one point that I cannot but bring to your special notice today. At the moment when Jesus was merging in the Supreme Principle of Divinity, He communicated some news to his followers, which has been interpreted in a variety of ways by commentators and those who relish the piling of writings on writings and meanings upon meanings, until it all swells up into a huge mess. The statement itself has been manipulated and tangled into a conundrum.

The statement of Christ is simple:

“He who sent me among you will come again!” and he pointed to a Lamb.

The Lamb is merely a symbol, a sign. It stands for the Voice—Ba-Ba; the announcement was the Advent of Baba. “His Name will be Truth,” Christ declared.

“He will wear a robe of red, a bloodred robe.”

(Here Baba pointed to the robe He was wearing!).

“He will be short, with a crown (of hair). The Lamb is the sign and symbol of Love.”

That Ba-ba is this Baba and Sai, the short, curly-hair-crowned red-robed Baba, is come.

He is not only in this Form, but, he is in every one of you, as the dweller in the Heart.

He is there, short, with a robe of the colour of the blood that fills it”

“God is the inner Motivator of all beings. All this is enveloped in God, All this is Vaasudheva, the Divine”— are to be in every one.

This is the inner mystery of Incarnation, God incarnating in all! All are One; The One is All. 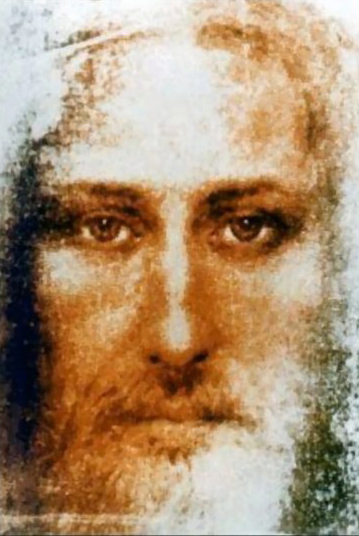 When Jesus was born three Arabian kings came to see Him. They were overjoyed at seeing the newborn babe. While returning, the first king said to Mary, “Mother, you have given birth to a child who loves God.” The second king said, “Mother you have given birth to a child who will be loved by God.” The third king said, “Mother Mary your child is not different from God, both are one and the same.” Once we understand the inner meaning of these three statements, we will know the truth. The one who loves God is the Messenger of God; the one whom God loves is the Son of God; the one who understands the principle of unity becomes one with God.

Worship Jesus by following His ideals. Jesus pointed to three stages. The first one is, “I am the Messenger of God.” He wanted to propagate the message of God. The second one is, “I am the Son of God.” The son has a claim to father’s property. What is the property of God? Truth, Love, Forbearance, Peace and Righteousness are the properties of God. So, man has to strive to attain these qualities. He has to practice, experience and propagate these virtues. Only then man deserves to be called Son of God. The third one is “I and My Father are One.” This stage is attained when the principle of unity is realized. When Jesus reached this stage, He had no suffering at all. He was always blissful and was prepared for anything. Even at the time of crucifixion, Jesus was smiling, because he realized that He was not the body. Body is bound to perish, but the indweller has no birth and death. Truly speaking the indweller is God Himself. Jesus understood that body was merely vesture, and He was the indweller.

You should have the firm faith that you are the Messenger of God. Propagate Swamis message to the entire world. Some people may like it and some may not. Do not bother about what others say, be it “yes” or “no.” ‘No’ and ‘yes’ relate only to you, but for Sai everything is yes, yes, yes. There are no defects in God. All words and deeds of God are perfect. You see the reflection, reaction and resound of your feelings. They are psychological in nature. God always gives good alone. Understand and experience this truth. 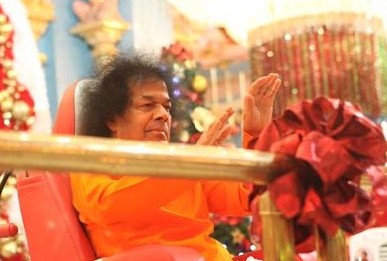 May the miracle of Christmas be in your heart this holy day!
May the peace of Sai be with you always. 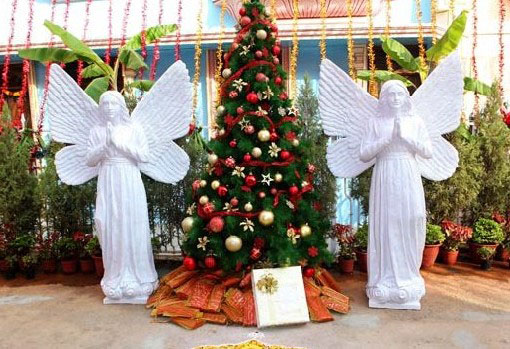 Today you have to remind yourselves of the ideals Jesus stood for. For ages, from time to time, many noble souls, endowed with immense spiritual power, have taken birth to propagate sacred teachings to the world. They struggled hard to make the world a good place to live in. But without understanding their noble intentions, foolish people tried to ridicule and persecute them. Right from his birth, Jesus had to face many trials and tribulations. When the name and fame of noble souls spread far and wide, many people become jealous. Asuya (jealousy) and Anasuya (absence of jealousy) are sisters. The history of Bharat is replete with many examples that bear testimony to this truth. Asuya has three children, viz, kama, krodha and dwesha (desire, anger and hatred). The Divine Trinity of Brahma, Vishnu, and Maheswara were born to Anasuya. The three wicked sons of Asuya (i.e. desire, anger ,and hatred) caused a great deal of suffering to Jesus, who strove tirelessly for the peace and welfare of society. Jesus was the epitome of compassion and the refuge of the poor, needy and forlorn. But many people tried to create troubles for Jesus, since they did not like his sacred teachings and activities. Their hatred for Jesus increased day by day. Even the priests turned against Jesus as they became jealous of his growing popularity. The fishermen held Jesus in high esteem. They started following his teachings and became his disciples. Many people out of jealousy laid obstacles in his path and even tried to kill him.

Jesus had twelve disciples. Judas was the twelfth disciple, who ultimately betrayed Jesus. At that time, there was only one Judas, but today there are many such ‘Judases’. Today the world is engulfed in unrest because of the rise in the number of betrayers like Judas. They are so mean-minded that they are easily tempted by money. Judas betrayed Jesus for just a few pieces of silver. Even two thousand years ago, money became the primary objective of man. Because of their greed for money, people resort to evil and unjust ways, distort the truth, and make false propaganda. This was the case then and it is so even now. No one needs to be afraid of such false allegations. Why should one be afraid of the mistake that one has not committed? In the past, many evil-minded people were jealous of the divine personalities who attained worldwide fame through their teachings of truth and righteousness. Even today there is no dearth of such wicked people.

Ultimately, what happened to Judas? He felt miserable for having betrayed Jesus for monetary gains. He shed tears of repentance. He hit himself, saying, “Fie on me! I am a traitor. I betrayed my own master and God.” Betrayal of God is the worst of all sins. Such betrayal can never be atoned in any number of births. So, never try to betray God. Love all. Salute even those who criticise you,because Divinity is present in all. Do not give scope for anger and spoil your mind. Pray to God with love. Even in the past, all noble souls and incarnations had to put up with criticism.

Consider love as your very life. Love alone makes one’s life sacred. One with love alone is a true human being. Love is man. Man is love. Man is God and God is love. It is love that unifies all. So, develop love. Tread the path of truth and righteousness and lead a peaceful life. These four values are the life supporting principles. There are no greater powers, no greater ideals, and no greater supports than these human values of Sathya, Dharma, Santhi, and Prema. Adhere to these four values and carry on with your life sojourn.